We (Dan & I along with my second cousin once removed visiting from Quebec) took off after work to catch a ferry over to the Island for the second to last BC Cup DH race of the season. This past winter Mt. Washington saw a record amount of snow, and thought that’s awesome in the winter, it impacted the summer. They only opened their bike park a few weeks ago, with only a couple of trails. Thankfully by the time the race weekend started the weather had cooperated, and all but a few trails were still closed.

The race course was pretty new this year due to one of the aforementioned closed trails being what was normally the race course. I’d never ridden Mt. Washington, so it didn’t really matter to me, as it was all new either way!

The course went down “MHT” to “Lower Monster Mile” to “Monster Hawk Connector” to “4 Cross”, which meant “pedal” to “technical” to “pedal” to “jumps”, which translates ultimately to FUN!. There was nothing super challenging on this course (unlike Kicking Horse) but it was all going to be a matter of staying on the bike and pedaling as fast as possible on the flats sections.

We hung out with about a dozen fellow racers, which was super fun, that night. Still managed to get to bed on good time after watching a classic movie, Speed on VHS! It was pretty funny, this place had a closet full of old VHS films.

Sunday, SUNDAY, Sunday!! RACE DAY! We did another nearly top-to-bottom practice lap in the morning, along with an easy run on a blue track to keep loose, before our race runs in the afternoon. My race run was essentially clean (one foot down in a technical rooty and wet section) and I crossed the finish line in 3rd place by just over a second. That was tight, every pedal stroke counts! 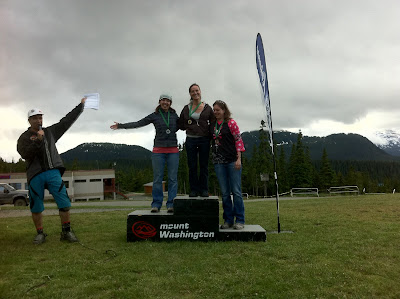 Unfortunately, Mt Washington was cold and a little rainy which didn’t make for the most pleasant weekend. I definitely didn’t bring enough warm riding clothes and it really felt like early spring. But with good people around and a warm bed to sleep in, I still had fun. Best part of the weekend was probably sneaking on to the last ferry of the night by just under 10 cars. Phew, another tight finish!

Two weeks to go until the last BC Cup race of the season at Hemlock Resort. I’m currently in 2nd place in my category (30+ masters women) and need a good result to secure that spot once all is said and done.